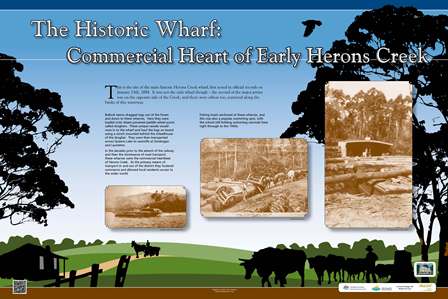 This is the site of the main historic Herons Creek wharf, first noted in official records on January 13th, 1894.  It was not the only wharf though – the second of the major jetties was on the opposite side of the Creek, and there were others too, scattered along the banks of this waterway.

Bullock teams dragged logs out of the forest and down to these wharves.  Here they were loaded onto steam powered paddle-wheel punts called droghers.  These unique vessels would nose in to the wharf and haul the logs on board using a winch mounted behind the wheelhouse of the drogher.  They were then transported across Queens Lake to sawmills at Dunbogan and Laurieton.

In the decades prior to the advent of the railway and then the dominance of road transport, these wharves were the commercial heartbeat of Herons Creek.  As the primary means of transport in and out of the district they fostered commerce and allowed local residents access to the wider world.

Fishing boats anchored at these wharves, and this was also a popular swimming spot, with the school still holding swimming carnivals here right through to the 1940s.