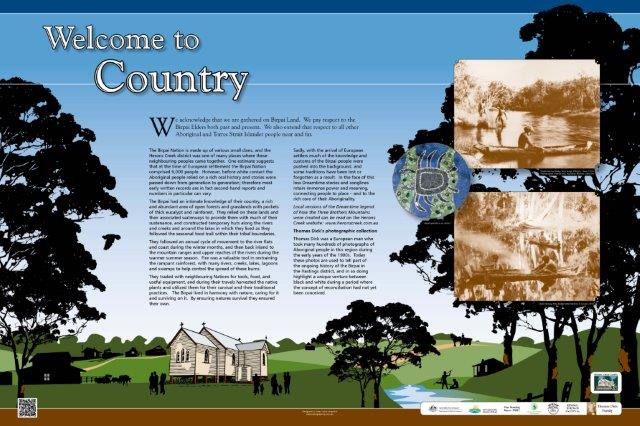 We acknowledge that we are gathered on Birpai Land.  We pay respect to the Birpai Elders both past and present.  We also extend that respect to all other Aboriginal and Torres Strait Islander people near and far.

The Birpai Nation is made up of various small clans, and the Herons Creek district was one of many places where these neighbouring peoples came together.  One estimate suggests that at the time of European settlement the Birpai Nation comprised 6,000 people.  However, before white contact the Aboriginal people relied on a rich oral history and stories were passed down from generation to generation; therefore most early written records are in fact second-hand reports and numbers in particular can vary.

The Birpai had an intimate knowledge of their country, a rich and abundant area of open forests and grasslands with pockets of thick eucalypt and rainforest.  They relied on these lands and their associated waterways to provide them with much of their sustenance, and constructed temporary huts along the rivers and creeks and around the lakes in which they lived as they followed the seasonal food trail within their tribal boundaries.

They followed an annual cycle of movement to the river flats and coast during the winter months, and then back inland to the mountain ranges and upper reaches of the rivers during the warmer summer season.  Fire was a valuable tool in restraining the rampant rainforest, with many rivers, creeks, lakes, lagoons and swamps to help control the spread of these burns.

They traded with neighbouring Nations for tools, food, and useful equipment, and during their travels harvested the native plants and utilized them for their survival and their traditional practices.   The Birpai lived in harmony with nature, caring for it and surviving on it.  By ensuring natures survival they ensured their own.

Sadly, with the arrival of European settlers much of the knowledge and customs of the Birpai people were pushed into the background, and some traditions have been lost or forgotten as a result.  In the face of this loss Dreamtime stories and songlines retain immense power and meaning, connecting people to place – and to the rich core of their Aboriginality.

Thomas Dick’s photographic collection
Thomas Dick was a European man who took many hundreds of photographs of Aboriginal people in this region during the early years of the 1900s.  Today these photos are used to tell part of the ongoing history of the Birpai in the Hastings district, and in so doing highlight a unique venture between black and white during a period where the concept of reconciliation had not yet been conceived.